Archangel Gabriel has delivered the most pivotal messages throughout history. In various religions, it’s believed he delivered the news of the birth of three renowned biblical figures. As such, he’s known as a messenger, communicator, and herald of visions.

Archangel Gabriel is associated with purity, emergence from darkness, and the colors white, copper, and gold. Besides being a messenger, he helps instill creativity and hope in people. He also aids in communication and raising children. Many people rely on him for wisdom when making decisions, like moving to a new city. So, when you need more clarity on a situation, you can call upon Archangel Gabriel.

In this post, we’ll explore the significance of Archangels in our lives. We’ll also look at Archangel Gabriel’s role in your life and how you can call upon him.

Archangels are divine beings given the highest rank amongst the Angels in heaven. They help us navigate life and guide us on our journey to spiritual awakening.

The word Archangel is derived from the Greek words “arche” (ruler) and “angelos” (messenger). The word “arche” means “ruler”, and the word “angelos” means “messenger”. This signifies the dual duties of these divine beings.

They’re responsible for supervising the Angels and delivering messages from God to human beings. The latter duty sometimes entails traveling back and forth between the heavenly and earthly realms.

In Christian and Jewish traditions, there are seven Archangels. However, Christians accept four in particular. These are Archangels Michael, Gabriel, Raphael, and Uriel.

You may already be familiar with Guardian Angels, but don’t confuse the two. Ordinary Angels take care of the individual. However, Archangels deliver messages from God that affect entire communities and groups of people.

Archangels are spiritual beings, just like Guardian Angels, so we can’t see them or speak to them directly. This is because they operate at a much higher vibrational frequency than humans. However, they can communicate with you by sending signs like Angel Numbers and showing you their unique ray of light.

Many people believe Archangels don’t have a specific gender. Supposedly, they appear to humans in any form they choose, depending on what will best accomplish their mission.

Let’s take a closer look at how these majestic spiritual beings are perceived in different religions.

Most religions recognize Archangels, but not all. In Judaism, Islam, and Christianity, Archangels are recognized for their power. However, there isn’t a consensus between these three religions regarding the purpose and appearance of Archangels.

The Hebrew Bible doesn’t explicitly mention Archangels in the official texts. There aren’t any references to Angels either in the chapters before Daniel.

In Islam, the recognized Archangels are Michael, Jibril (Gabriel), Azrael, Israfil, Munkar, and Nakir. Michael is the Archangel of the weather. Jibril is the Archangel who revealed Allah’s words to Muhammad as the Qur’an on the Night of Power. Azrael is considered to be the Angel of death.

The most popular Archangel in the Christian tradition is Michael. There are two references to him in the Bible, specifically in the New Testament.

Gabriel and Raphael are also sometimes recognized as Archangels in the later Christian tradition, including Uriel. However, Archangel Gabriel isn’t mentioned explicitly in the gospels.

Eastern Orthodox tradition recognizes seven Archangels. Some Protestants see Michael as the sole Archangel. Jehovah’s Witnesses believe Jesus was the reincarnation of Archangel Michael. So they view him as the first and mightiest of all God’s creations.

Archangels aren’t at the top of the spiritual being hierarchy despite popular belief. Medieval Christian theologians organized Angels into several orders called Angelic Choirs. In fact, Archangels appear in the lowest order between Principalities and Angels.

Who Is Archangel Gabriel?

Archangel Gabriel is the messenger of God and herald of visions. He translates God’s messages so humans easily understand them. And he helps us accept these messages with a pure heart. Gabriel means “God is my strength” or “God is my hero” in Hebrew.

This divine being is known to have delivered important messages to people throughout history. In Judaism, Islam, and Christianity, it’s believed that Gabriel delivered the news about the birth of three renowned religious figures. This includes Jesus Christ, John the Baptist, and Isaac. Muslims believe Gabriel delivered the Qur’an to the prophet Muhammad.

Gabriel also often appears in dreams. In the Christian tradition, Gabriel appeared to Joseph in a dream. The message he is said to have delivered to Joseph was that he’d be the father of Jesus Christ on Earth.

People call upon Gabriel when they feel trapped or in a rut. Some even believe he can grant them glimpses of the future.

What Does Archangel Gabriel Represent?

Archangel Gabriel is associated with peace, patience, and calm. Sometimes, he’s also affiliated with childbirth, raising children, and adoption. This is because it’s believed he delivered the message about the upcoming births of three crucial biblical figures.

He is an essential Archangel of the arts, mainstream media, social media, and self-expression in popular culture. Gabriel is often depicted blowing on a trumpet in sculptures and art, pointing to his role as a divine messenger. Other symbols that represent Gabriel include:

Gabriel is an Angel of water. This means he symbolizes purity, clarity, and receptiveness. Like water, Gabriel’s energy flows into your life when you pray for help.

Each Archangel is assigned a corresponding color. Archangel Gabriel’s electromagnetic energy is associated with the color white and the fourth ray of light.

This light symbolizes purity, clarity, and emergence from darkness. It’s revealed to you when you’re looking for answers, and it shows you that positive change is on the horizon.

Gabriel is also associated with shades of yellow to gold. The golds represent ascension, uplifting spiritual energy, and divine insight.

Some believers claim Gabriel’s aura is a copper color. So, if you see flashes of copper light or experience an attraction to copper objects, Archangel Gabriel may be nearby.

Archangel Gabriel is believed to embody Angel Number 555. When this number appears around you or in your dreams, it may be Gabriel answering your prayer. If “555” is in your birth date or name number, it may mean he’s your Archangel. And his divine spirit lives in you.

What Is Archangel Gabriel’s Purpose? 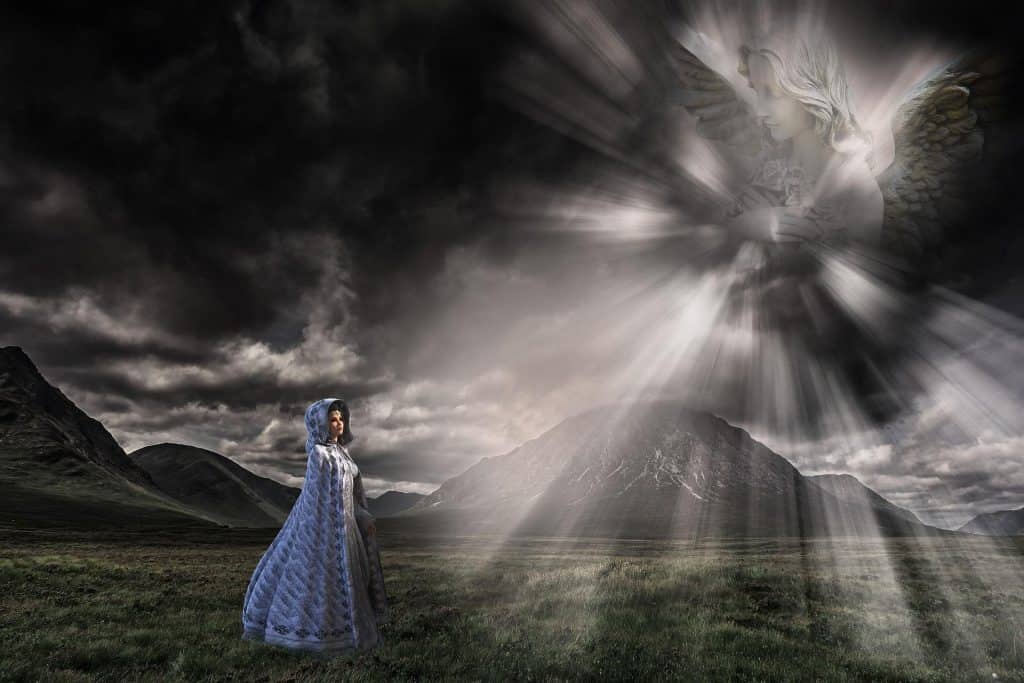 The divine Archangel Gabriel is a messenger, channel, and communicator of the highest order. He works to inform people about what’s coming. And he acts as an agent to create new opportunities related to your life’s purpose.

He oversees the Throat Chakra, the energy point in our bodies associated with communication, truth-seeking, and speaking. He also carries a powerful energy that raises vibrations. And he sparks an understanding of our inner wisdom.

Gabriel watches over children, from newborns to teenagers. He ensures they develop the right skills, and he helps caretakers understand their level of communication.

Gabriel is the patron saint of those who work in the communications and telecommunications industries. However, many professions rely on his guidance and protection in daily working life.

Communicating with an Archangel is not much different from talking to your Guardian Angel. There are simple ways to reach out to Gabriel. The critical factor is for you to be open to receiving his divine message.

Connecting with Gabriel allows you to tap into his gentle and soft energy. He may also spark your creativity and help you discover your inner childlike joy. Simply ask Archangel Gabriel to enter your life and help you with a specific issue or situation.

Bring up anything you need clarity on or don’t understand during your conversation. Archangel Gabriel often communicates through thoughts and insights that appear in your conscious mind. So, you should know what to do next by the end of the conversation.

Archangel Gabriel’s energy is powerful during manifestation and meditation. He can grant you the clarity to have a clearer understanding of your actual wants and intentions. You might instantly receive insight or get a burst of inspiration when you call upon Gabriel during these processes.

When to Call Upon Archangel Gabriel

When you’re feeling lost in life or trapped in a situation, call on Gabriel to help you move forward. He can help you make changes in your life to escape whatever turmoil is holding you back. Gabriel can also be called upon when you start a new chapter in life.

Archangel Gabriel can also be relied upon when you need help managing your time. He helps individuals complete challenging tasks timeously without tension and stress.

If you’ve run out of creative inspiration, you can call upon Archangel Gabriel. He’s there to spark your creativity and help you make the most of your creative gifts.

Archangel Gabriel can also intervene when you can’t find a solution to a problem or issue. He’s willing to help you find a clever workaround or create an innovative solution.

Archangel Gabriel is a symbol of hope and understanding. He’s here to offer you guidance when you feel lost and unsure about your next move in life. Trust in him and be open to receiving his message. And remember to thank him for caring for you and intervening when you need it most.