I’m sure everyone has heard of Archangel Michael before. But what do we know about this divine celestial being and his fellow Archangels?

Archangels play an essential role in our lives. They are responsible for guiding us, protecting us, and helping us to grow spiritually. Archangel Michael is one of the most well-known Archangels. He is known as the protector and defender of humanity. And if you need protection, strength, or willpower, Archangel Michael is the ideal celestial being to ask for help.

This blog post will explore the realm of the Archangels and the role that Archangel Michael plays in it. We’ll also look at how Archangel Michael works with us and what we can do to call on him when we need his guidance.

“Archangel” comes from the Greek word, meaning “chief or principal Angel”. And there are many different stories and beliefs about Archangels. Still, they are generally considered powerful beings who carry out God’s will.

Archangels are just one of the many spiritual guardians that guide and support mankind. They are revered in almost all religious texts. And are universally considered to be the most supreme celestial beings working directly with God or The Source.

Working with an Archangel is not precisely the same as working with your Guardian Angels. If an Archangel enters your life to offer you assistance, it typically pertains to a specific type of problem. And it’s usually an indication that the problem you’re facing is somewhat severe.

Remember that, just like your Guardian Angels, the Archangels are not physical beings. They are also light beings that operate at a much higher vibrational frequency than humans. As such, they cannot appear to us and speak to us directly.

That said, should they need to convey a message, your spiritual guides will often use signals to gain your attention. These could be numbers, such as Angel Numbers, various light ray colors, or Angel Colors. However, it’s not uncommon for people to see mental visions of their Guardian Angels and Archangels.

In Christianity, an Archangel is seen as the highest-ranking Angel. In the Bible, he is first introduced in the book of Daniel as a great prince who stands up for Daniel’s people. Archangel Michael appears to defend Jesus during his crucifixion in the New Testament. He is also mentioned in the book of Revelation as leading God’s army against Satan and his followers.

On the other hand, in Hinduism, celestial beings that carry out the work of The Source are not called Angels. Instead, there are said to be four “faces” of the God Vishnu. These are known as Garuda, Hayagriva, Narasimha, and Varaha. Each of these faces is associated with a different cardinal direction. They also provide guidance and assistance to those in need.

Buddhism teaches that there are six realms of existence. And that each realm is inhabited by different kinds of beings. These beings include humans, animals, ghosts, demons, and gods. The highest realm is known as the “Deva Realm,” inhabited by celestial beings known as “devas.” The devas are said to be incredibly beautiful, and they live in a state of eternal bliss.

Who is Archangel Michael? 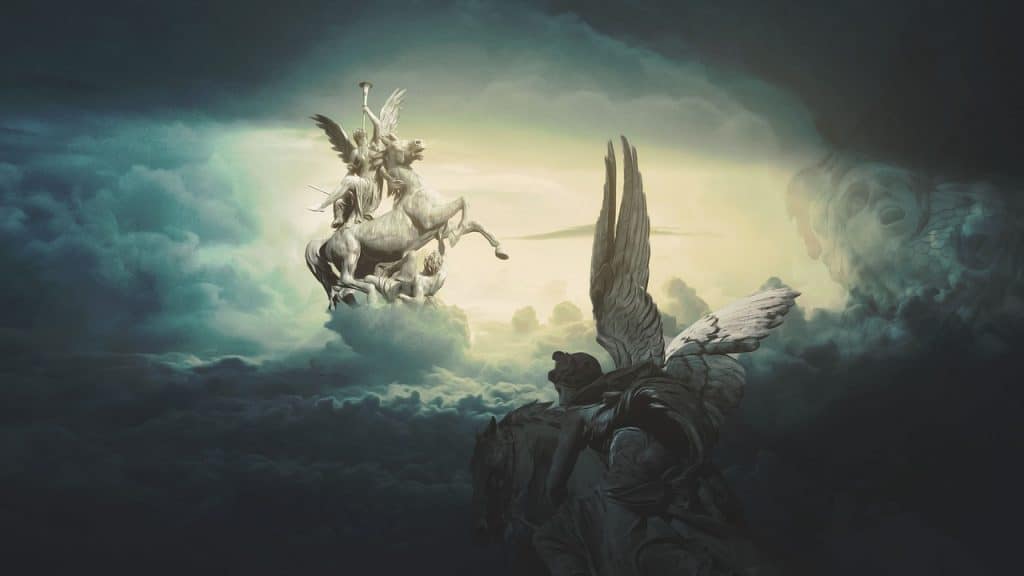 Archangel Michael is one of the most popular and well-known Angels in the modern-day. He is often called upon for help and protection and is known for his powerful energy. And was one of the original seven Archangels present when the world we know came into being.

While Archangel Michael is a prominent figure in many religious texts, he is known by several different names. These names include:

But it is widely accepted that Archangel Michael is the most powerful of all the Archangels. And it is believed that he is closer than any other Angel to God or The Source.

What does Archangel Michael Represent?

Archangel Michael represents protection, strength, courage, and truth. He is often depicted as a mighty, winged warrior. And in some representations, he is also shown holding a sword or shield.

The color blue is often associated with Archangel Michael. And he is the embodiment of the first divine light ray in the celestial realm. In spirituality, blue means protection, peace, and calm. It is also the throat chakra’s color, associated with communication and expression.

Archangel Michael’s name means “He who is like God”. And as such, he is often considered the Angelic representation of God or The Source.

This divine Angel is also linked to the element of fire, which means he is a powerful force for change. And he is associated with the planet Mars, which is known as the “Warrior Planet”.

We already know that Archangel Michael is representative of the first light ray, which is blue. And he, therefore, most often uses the color blue as a sign of his presence.

Some also say that the color red is associated with Archangel Michael. This is because red is often seen as the color of attributes such as courage, strength, and willpower.

When it comes to numbers, two prominent spiritual numbers are believed to represent Archangel Michael. The number 9 is the most prevalent of these. And that’s because it’s the highest single-digit number and symbolizes completion and fulfillment.

Archangel Michael is also believed to be the patron Archangel of those with the Life Path Number 9. This is because people with Life Path Number 9 are destined to be natural leaders. They’re also creative and intuitive individuals with a solid connection to the spiritual realm.

That said, the number 11 is also sometimes associated with Archangel Michael. The number 11 represents new beginnings, spiritual awakening, and higher consciousness in numerology. 11 is also a Master Number. This means it is an incredibly powerful number representing significant influence and potential.

What is Archangel Michael’s Mission?

There are many different stories and beliefs about Archangel Michael’s mission on earth. But generally speaking, his primary mission is to help mankind overcome fear and tap into their inner strength.

That said, Archangel Michael has four core roles in the spiritual realm. These are:

You may feel you need assistance with a particular problem that only Archangel Michael might help you resolve. But it’s important to note that you should not call upon him to help with issues you are capable of handling yourself. And, in times of need, your first port of call should always be your Guardian Angels.

Your Guardian Angels are with you at all times and are wholly focused on you. As such, they are ready to help you whenever you need them, for whatever reason. Should they not be equipped to handle the problem alone, your Guardian Angels will seek the help or advice of more senior Angels.

Archangels are at the peak of this celestial hierarchy. And while they are immensely powerful beings, each of them works within a specific area of expertise. As a result, each Archangel helps an immeasurable number of souls simultaneously. Therefore, Archangels should only be contacted directly if the situation is dire.

There are many ways to communicate with Archangel Michael. Prayer, meditation, visualization, or simply asking for his help aloud are some of the common methods. But the most important thing is to ensure you’re in a quiet and safe place when you attempt to speak to Archangel Michael.

You could also use the color blue to draw upon Archangel Michael’s energy. For instance, you could light a blue candle when praying or meditating. This may enhance your ability to connect with his Archangel.

When you ask for Archangel Michael’s help, you may see him appear in your mind’s eye as a powerful being of blue light. Alternatively, you may feel his presence as a warmth in your heart or a tingling sensation in your body.

When to Call Upon Archangel Michael

Bear in mind that any requests made to Archangel Michael should not be detrimental to anyone else. Requests that could harm others will not be granted.

Perhaps you’d like to call upon Archangel Michael to help someone other than yourself. In this case, you must speak to the other person before trying to contact this celestial being. Your request will be in vain if you have not received consent from the other person first.

As an example, the following represent some reasons you may want to ask Archangel Michael for help:

Remember to have faith that your request will be granted. Doubt creates negative energy and could form a barrier to connecting with the spiritual realm. Go into the process with a positive outlook. And have confidence that your divine guardians will be there for you in your hour of need.

We all have Guardian Angels who guide and protect us at all times. But it’s good to know that other spiritual guides can help us in our hour of need. Archangel Michael is one such powerful being.

If you’re ever in critical or urgent need of protection or courage, don’t hesitate to call upon Archangel Michael. He is always there to help those who need it. Trust in him and have faith that he will answer your prayers.