Master Jesus is a prominent figure in Theosophy and the Ascended Master Teachings. You might already be familiar with Jesus from the Christian bible. And while He and Master Jesus reference the same divine individual, His representation in Theosophy is somewhat different.

In Theosophy, the Journey of Master Jesus on earth is considered similar to that of Jesus Christ from Christian teachings. However, Theosophists believe that he studied under many, including Maitreya, the Great Divine Director, and Lord Himalaya, Fourth Root Race Manu. Master Jesus represents unconditional love, forgiveness, compassion, and healing. In addition, he’s associated with the white ray of light, which symbolizes joy and grace.

This post covers everything you should know about Master Jesus. We’ll also discuss when to call upon Him and in what circumstances you can do so.

Who Are the Ascended Masters?

Ascended Masters are spiritual beings who co-exist in the spiritual realm with Guardian Angels and Archangels. And there are several Ascended Masters, including Masters Saint Germain, Buddha, the Virgin Mary, and Jesus.

These beings were once humans who lived on earth, unlike Angels. They adopted various identities after undergoing a series of spiritual transformations. These rebirths gave them firsthand experience of the struggles humanity faces.

In addition, the Ascended Masters existed through multiple lifetimes. This enabled them to face many challenges and pick up several lessons.

The Ascended Masters embarked on personal growth journeys and practiced self-awareness. They also severed themselves from negative expression to achieve self-mastery.

Self-mastery comprises a spiritual journey in which one edges closer to enlightenment. It’s all about choosing forgiveness, tolerance, and gratitude when you’re in situations that don’t encourage these feelings. At the end of this journey is ascension to the spiritual plane, where they become an Ascended Master.

Given the Ascended Masters are dubbed experts of the human experience, their insight transcends that of Guardian Angels and Archangels. As such, their teachings and wisdom can help us significantly more.

Each Ascended Master has a unique role. However, they all have one purpose: helping humans on the road to enlightenment and ascension. They achieve this by:

Ascended Masters can be integral to your spiritual growth. When you need guidance, they may send messages your way in the form of Angel Numbers or rays of light.

In the next section, we’ll examine the role Ascended Masters play in various religions.

The Ascended Masters in Religion

Ascended Masters are derived from Theosophy, an occult movement formed in the US during the late 19th century. Theosophists Henry S. Olcott and Helena Blavatsky claimed they discovered enlightened beings, introducing an idea most were unfamiliar with.

Blavatsky, in particular, said she encountered Master Saint Germain. And she held various secret documents from him. She referred to him as one of her ‘Masters of Wisdom.’

Guy Ballard, author of various books on Ascended Masters and founder of the ‘I AM’ activity, supported her claims. He publicized his alleged encounters with Master Saint Germain as well.

As a result, the Theosophical concept of the Masters of the Ancient Wisdom was born. This concept introduced various Ascended Masters. Some were derived from existing religions, like Master Jesus.

This spiritual Master shares characteristics with Jesus Christ, the Son of Man, in Christian biblical teachings. Jesus’ life is covered in the Bible’s New Testament, with his journey to ascension covering the four Gospels.

While Theosophists believe in Ascended Masters, Christians are opposed to the theory. These beings are a matter of controversy in Christianity and don’t coincide with Christian teachings. They regard Jesus Christ as the one and only enlightened being to call upon for guidance.

Who is Master Jesus? 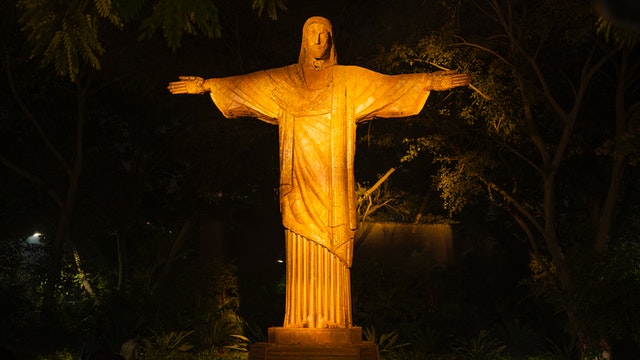 You may already be familiar with Jesus. He’s the central deity of the Christian church, with the majority of the New Testament of the Bible devoted to him.

In addition, you may know some stories about his life of service to the ill and that he preached God’s word. However, few are aware of the Theosophist’s understanding of Jesus Christ.

Master Jesus is the Theological interpretation of Jesus in Theosophy and the Ascended Master Teachings. According to these Teachings, he first studied at the Brotherhood of Luxor, an anonymous school in Egypt. He enrolled in this school to prepare for his ministry.

Afterward, he moved to India. He studied the teachings of Maitreya, the Great Divine Director, and Lord Himalaya, the Manu of the Fourth Root Race.

After completing his studies, Master Jesus moved to Judea, where he started working as a carpenter before beginning his ministry. According to the teachings, he got this work through his father, Joseph, a general contractor.

In addition, the Ascended Master Teachings assert that two beings existed in divine Master’s body during his ministry. One was Maitreya, and the other was Jesus of Nazareth. Allegedly, these beings functioned together as Jesus Christ. However, instead of overshadowing Master Jesus as taught in Gnostic Christology, Maitreya encouraged him instead.

Theosophists and students of the Ascended Master Teachings believe he experienced the fourth level of initiation during his crucifixion. This is one of the levels of spiritual development in Theosophy. According to Theosophy writer Alice Bailey, few people undergo literal crucifixion at this stage, but Master Jesus did.

Like most Ascended Masters, Master Jesus existed as several people. These include:

Now that you know more about this divine being let’s look at what He represents.

What Does Master Jesus Represent?

Master Jesus represents unconditional love. During his ministry on earth, he loved openly. His actions weren’t driven by the social standings of the people he interacted with. In addition, He never stayed away from the ill and loved them as if they were part of his family.

He’s also a symbol of compassion and healing. Master Jesus was known for his healing powers while he was on earth. He performed miracles in various towns, restoring the health of many whom society regarded as lost causes.

This Ascended Master also resonates with the energies of forgiveness and joy. And he’s associated with devotion to our inner Christ.

As mentioned before, Ascended Masters may communicate with us through Angel Numbers or a unique ray of light. Seeing either of these symbols may signify that the divine is trying to contact you.

Master Jesus is affiliated with the color white. This color embodies the energy of joy and lightness of being. And it symbolizes the movement from darkness to light. Focusing on this color while contacting this divine Master, may give you the necessary clarity and understanding.

What is Master Jesus’ Mission?

Master Jesus’ ministry on earth revolved around spreading God’s word and performing acts of healing unachievable by others. Through his ministry, he taught and demonstrated the Christ consciousness. And that all humankind can achieve ascension.

Following his ascension to the ascended realm (or heaven), he continues his ministry through messengers. These individuals allow Master Jesus to carry out his mission of helping humans have clear communication with God.

He’s also dedicated to providing divine guidance and direction and helping us when we lack faith. In addition, this spiritual Master aims to teach us forgiveness. Not only should we lean towards it in adverse situations, but also that forgiving others begins with forgiveness of oneself. 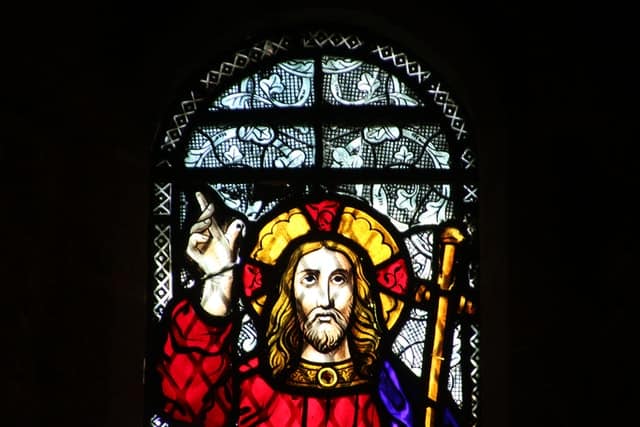 If you interact with your Guardian Angels, you may already have some tools in your arsenal to contact Master Jesus. These include prayer and meditation.

Prayer is the most common way to reach him. When praying to Master Jesus, find a quiet place to sit, so you can focus entirely on connecting with him. Also, ensure you open your heart to him.

Meditation is another way to communicate with Master Jesus. It can take some time for beginners to master mediation. Therefore, spend as much time as possible coming to a place of stillness to better connect with this spiritual guardian.

Remember, you must actively work on your spiritual growth to ensure your communication isn’t one-sided. As you evolve on your spiritual journey, your vibrational energy will increase. Then you’ll begin to align better with the Universe, and it’ll be easier to convey your messages to Master Jesus.

When to Call Upon Master Jesus

Master Jesus is available when you need healing. Whether your physical, mental, or spiritual health is in a dire place, Master Jesus may be able to help you.

You can also call upon this divine guide for guidance. If you’ve felt like you don’t know where you’re going or can’t make a decision, he’s happy to guide you.

Ascended Masters like himself have acquired vast knowledge from their time on earth. He’s a master of all life’s spiritual, mental, and physical aspects and challenges. Therefore, he knows what you’re dealing with and can pose a solution to your problems.

Master Jesus is also available if you’re lacking faith. Contact him, and he may help you see that there’s light in the darkness you’re facing.

Also, if you find it hard to forgive someone, call upon Master Jesus. He’s the symbol of forgiveness, so he can help you overcome this hurdle.

Master Jesus is the Theosophical representation of Jesus Christ. His journey on earth, according to Theosophy, isn’t much different from those detailed in Christian teachings.

Before starting his ministry on earth, Master Jesus studied in Egypt. His journey took him to India and eventually Judea, where he worked as a carpenter.

Master Jesus performed several miracles in his lifetime. And he proclaimed the word of God to everyone who would listen. His spiritual journey eventually led him to what’s known in Theology as the fourth level of initiation. This level entails crucifixion, but often in a figurative sense.

A symbol of forgiveness and healing, Master Jesus is available in times of poor health or negative situations. You can contact him through prayer or meditation.

Bear in mind that the higher your vibrational frequency, the stronger your connection will be. Also, don’t forget to thank Master Jesus for the work he’s already done in your life.