If you’ve discovered your birthday is linked to the Pisces zodiac sign, you may want to know more about it. After all, your zodiac sign is a window into your personality, habits, and interests. It can help you understand yourself and others better.

Those born between February 10 and March 20 are Pisceans. Their ruling planets are Jupiter and Neptune, giving them a generous and magical nature. Pisces is a water sign, so they easily get along with other water signs. And they favor deep emotional connections, caring for people, and everything mystical. But their open hearts and compassion could be their cross to bear.

Learning about your zodiac sign is not only eye-opening but also fascinating. We’ll walk you through everything you need to know about the Pisces zodiac sign, including their career and romantic choices.

Before getting into the details of the Pisces zodiac sign, let’s explore zodiac signs in their entirety. You’ve probably come across a section detailing various horoscopes if you’ve ever read a magazine or newspaper. They’re typically characterized by zodiac signs.

Zodiac signs are essentially the “North Star” pointing towards a prediction for your day, week, or year. They’re linked to astrology, the study of how stars and planets affect human behavior. According to astrology, there are twelve zodiac signs based on the constellations prominent at certain times of the year. This includes Leo, Scorpio, Sagittarius, Aquarius, Pisces, Virgo, Libra, Taurus, Cancer, Capricorn, and Aries.

Each zodiac sign is associated with an earth element: air, water, fire, or earth. These elements represent the energy that exists within us. They influence our emotions, behavior, and thinking. Besides these elements, every zodiac sign has its unique strengths, weaknesses, and personality traits.

Zodiac signs have primarily been used as a compatibility mechanism in popular culture. But they can provide you with insights into your personality, behavior, and habits, much like numerology. They can also help you understand the challenges you face in life and point you toward your ideal career path. 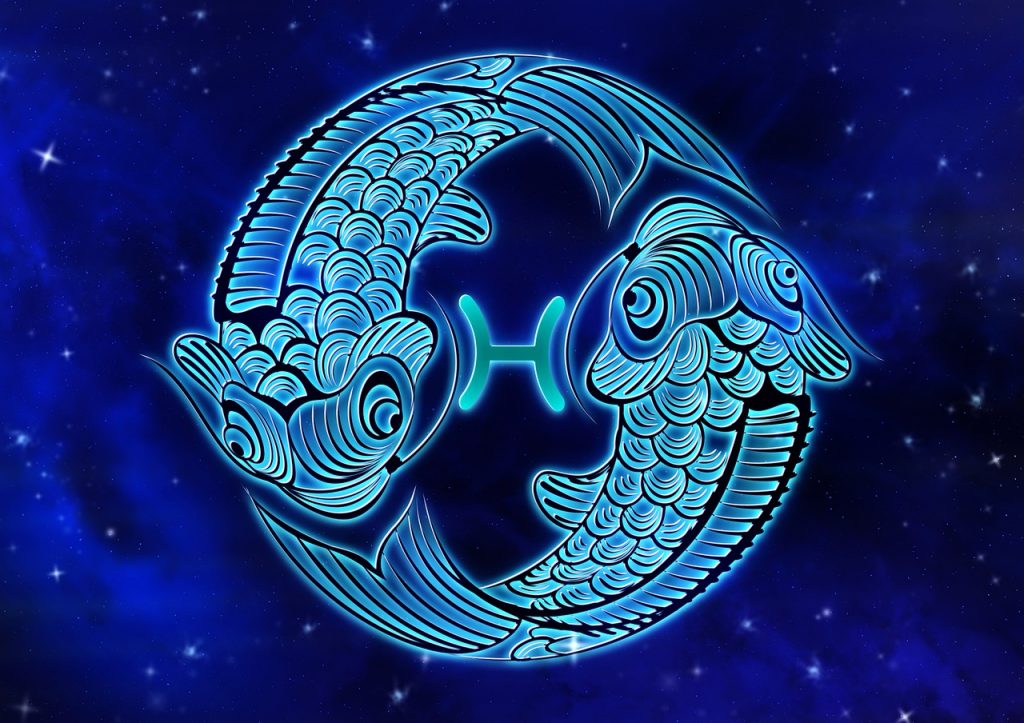 Pisces is the 12th and last sign of the zodiac, representing those born on and between February 10 and March 20. The Pisces sign lies between Aquarius and Aries. Two fish swimming in opposite directions symbolizes Pisceans. And this symbol illustrates the conflict within them, torn between changing the world and seeking refuge.

In ancient astrology, Jupiter ruled the Pisces zodiac sign. In each zodiac sign, the lucky planet grants fortune and blessings and typically dominates for 12 to 13 months. Therefore, everyone can benefit from the planet’s optimistic, compassionate, and generous energy.

Neptune, the mysterious psychic planet, rules Pisceans in modern astrology. Their behavior is often fluid, given the two planets presiding over the Pisceans. They can be soulful and joyful while also being magical and worldly.

As Pisces is a water sign, a Piscean’s emotions can get the best of them. And their ultra-sensitivity can be a giant hurdle in their path. But they’re one of the most intuitive of the signs. And they’re as mysterious as the depths of the sea. Intimacy and deep conversations are their go-to. They also love their secrets and champion their loved ones.

The Pisces zodiac sign shares the water element with the Cancer and Scorpio signs. So, these signs often get along more easily than the rest of the zodiac.

Pisces is a mutable sign as well. This means the sign falls at the end of a season. Pisces stands at the end of winter, so Pisceans are adaptable and good at solving problems. But too much of this mutable energy can give them an elusive attitude or perceived flakiness.

Empathy, compassion, and devotion characterize the Pisces zodiac sign. Pisceans lead with their heart, and they’re sensitive to others’ feelings. This can be a good and a bad thing. They can easily be so consumed by other people’s experiences that their emotions get the best of them. As a result, it can be hard for them to get the support they need from others.

Pisceans are naturally superb listeners. If their friends or family chat their ear off, it’s probably because they can sense their open energy. They also place their loved ones on a pedestal, so they’re always more than willing to lend an ear.

They’re often regarded as wise as if they’ve lived many lives. This is because Pisces is the last zodiac sign. And it’s believed to have absorbed all the joys, pains, hopes, and fears of the other signs. Other personality traits Pisceans have include:

Pisceans lean towards hobbies and activities that are true to their personality. Anything soothing, involves creativity, and encourages imagination brings them joy. Some common hobbies and interests amongst Pisceans include:

A major pet peeve for Pisceans is strict plans. They prefer to go with the flow. So, planning everything to the T puts a damper on their productivity. While it’s great not to be bogged down with plans all the time, having structure may help them get things done.

Bullies and know-it-alls drive them up the wall. They also can’t stand cruelty and callousness. Being told that they’re overthinking something can easily tick them off. Their minds are beautiful places filled with wild ideas, which makes them great.

Who Gets Along Best With Pisces? 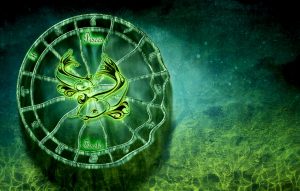 Fellow water signs (Cancer and Scorpio) are the easiest to get along with in friendships and romantic relationships. Their emotional and intuitive attitude drives them to a consensus on almost all subjects. They also connect with earth signs (Virgo, Taurus, Capricorn) because of their grounded nature.

That said, air signs (Aquarius, Gemini, Libra) and fire signs (Aries, Sagittarius, Leo) take a bit of getting used to. They can challenge the Pisceans’ thought process and way of doing things. But these allow them to grow and gain new insights into their relationships.

Pisceans in Their Careers

As natural-born creatives and intrinsically compassionate individuals, those with the Pisces zodiac sign thrive at being in roles such as:

Self-expression is important to them, so a career that fosters this is what they’ll likely gravitate towards. Doing something that they believe in gives them boundless energy as well. But their secretive nature often leads them to a job where they aren’t in the spotlight. Their empathy drives them to think about improving others’ lives constantly.

At work, Pisceans aren’t always confident in taking the leap. It’s wise to remember that even when they fail, they can learn from their mistakes and become a success. So, they should embrace their visionary abilities and take charge from time to time.

Pisceans in Their Relationships

Those born under the Pisces zodiac sign are very romantic. Being in love is often their resting state, so they easily fall in love. They favor deep emotional connections and devotion to their romantic partners. Pisceans are also open to possibilities in their romantic relationships.

Like these relationships, they lean towards friendships that allow for emotional and mystical connections. They’re often dubbed the therapist amongst friends. This is because friends will often come to them with their problems first.

While this is a good thing, it often means they expend much of their energy on others, leaving little for themselves. They also have a hard time asking for help. Pisceans need to learn to communicate openly with friends to avoid uncomfortable situations in the future.

Family always comes first with Pisceans. Sadly, this means they often put themselves last. The best remedy to this problem is to understand that they don’t have to fix everything. Allowing their loved ones to solve their own problems and have their opinions won’t harm anyone. They must take care of themselves while making an effort to help others. 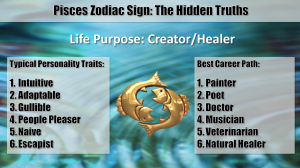 A water sign ruled by Neptune and Jupiter, those born under the Pisces zodiac sign are mystical, sensitive, and compassionate. As the last zodiac sign, the lessons learned by all the other signs are intrinsic in Pisceans. This gives them the ability to easily comprehend friends, family, and romantic partners’ feelings and emotions.

Their generous and loving heart is their greatest asset. It allows them to be there for friends and family, no matter what. Also, it makes them great romantic partners.

But their big hearts can be their downfall. They can easily fall in love with others and face a great deal of heartbreak in their lifetime.

Giving their attention and focus to others’ problems leaves little time to take care of themselves. Therefore, it’s vital that they find a balance and put themselves first most of the time.