Knowing the most common zodiac signs can put several strange coincidences into perspective. Perhaps you’ve noticed a month of the year filled with several of your friend’s birthdays. Or that the people you meet mostly fall under a specific zodiac sign. That’s because more people are born under particular zodiac signs than others.

Virgo is the most common sign of the zodiac. Individuals born under this sign are associated with dedication, modesty, and pragmatism. Leo is another common zodiac sign in astrology. The lion symbolizes it, and it’s a fire sign. Besides these star signs, many people are born under Libra and Cancer. Libras are natural-born peacemakers, while Cancerians are inherently homebodies.

What Are Zodiac Signs?

The observation of zodiac signs dates back to the second millennium BC. Historians claim the Babylonians used horoscopic astrology during that period.

According to historians, the Babylonians observed the seasonal movement of the planets, the sun, and the moon. Then they linked their findings with their beliefs in divine intervention in their daily life.

Therefore, the connection between human behavior and celestial bodies wasn’t invented in popular culture. Although commercialized by it, zodiac signs and astrology have been studied for thousands of years.

Believers of astrology consider the Babylonians to have been the first astrologers. Today, three main branches of astrology exist around the world. This includes:

Each branch has unique star signs and interpretations. Certain parts of the world adhere to Chinese and Indian astrology. However, Western astrology is the most widely used and the focus of this blog post.

Each zodiac sign represents 12 constellations of stars present in the sky at a specific time of year. These constellations can be observed as the earth revolves around the sun.

Zodiac signs are grouped further by elements. Therefore, you will often see references to earth, water, fire, or air.

Each element is linked to energy within us. For instance, astrologers claim earth signs embody the element’s essence because of their rational and grounded nature.

As Western astrology evolved, zodiac signs became more than tools to determine one’s compatibility with another. They help people understand their behavior and the challenges they face in life. Astrologers also use them to advise people about their ideal career path based on their inherent characteristics.

The 4 Most Common Zodiac Signs in Astrology

Virgo is top of the list of the most common zodiac signs. About 0.093% of people are born under this star sign. So you may find that many people in your life have birthdays between August 23 and September 22.

A young maiden carrying a bundle of wheat represents Virgo. And Mercury, the messenger planet of communication, also rules the zodiac sign. However, the planet’s energy is most evident in a Virgo’s life during Virgo season.

Virgo is an earth sign, so Virgos are characterized by a realistic and grounded nature. It’s a mutable sign, meaning it stands at the end of a season in the northern hemisphere. Therefore, Virgos thrive with change, and they’re highly adaptable.

Virgos take a pragmatic approach to life. They’re perfectionists at heart who set high standards for themselves.

A Virgo’s strength and weakness is their acute sense of self-awareness. This can cause them to be confident one minute and insecure the next. Some of the most common Virgo personality traits include:

Virgos are suited for careers where their inherent characteristics will be of value. Given their detail-oriented nature, they would do well at jobs requiring them to spot glitches and errors. These are some of the possible career options for Virgos:

Virgos get along best with zodiac signs that match their grounded nature. This includes fellow earth signs: Taurus, Capricorn, and Virgo. They are also compatible with the following water signs:

Although Virgos may have some difficulties with Pisceans, they can forge a bond based on their mutable nature. Virgos are also compatible with Geminis because Mercury also rules the sign. 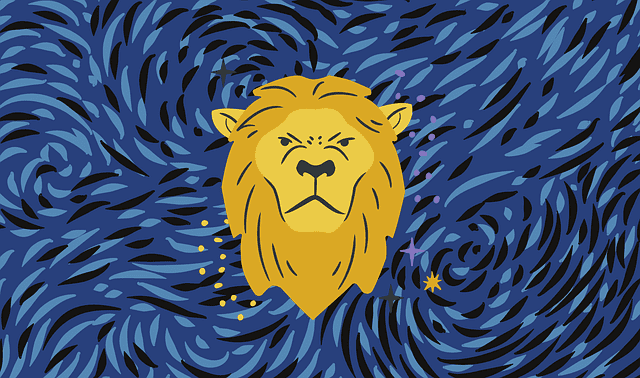 Leo is the second on our list of the most common zodiac signs, with about 0.09% of people born under it. This sign represents individuals with a birthdate between July 23 and August 22.

The lion symbolizes Leos. Therefore, the sign is considered one of the most influential in the zodiac. Additionally, the sun rules Leo, a symbol of the vital life force responsible for powering all other planets.

Leo is a fixed fire sign, so Leos embody the fierce energy in us all. They are also full of primal, creative energy and are hardheaded in nature.

Some of the most common personality traits associated with Leos include:

Leos are known for their confidence and ambition. They love to be seen; most spotlights draw them in like a moth to a flame. They tend to be the brightest in the room, and their social game is often on point.

A Leos’ fierce courage and natural regality are synonymous with that of their spirit animal. They also guard those closest to them with as much vigor as a lion in charge of his pride. Leos are also known for their caring, hospitable, and open nature.

Leos are natural-born leaders, so they thrive in management positions. Being at the top of the food chain is in their nature, as much as being in the spotlight. However, their softer side makes a career where they care for children suitable. Some career options that would suit a Leo include:

Leos get along most with fellow fire signs: Sagittarius, Aries, and Leo. These zodiac signs match Leo’s fierce and passionate energy. Geminis, Libras, and Aquarians are also compatible with Leos because of their lively, fast-paced energy. 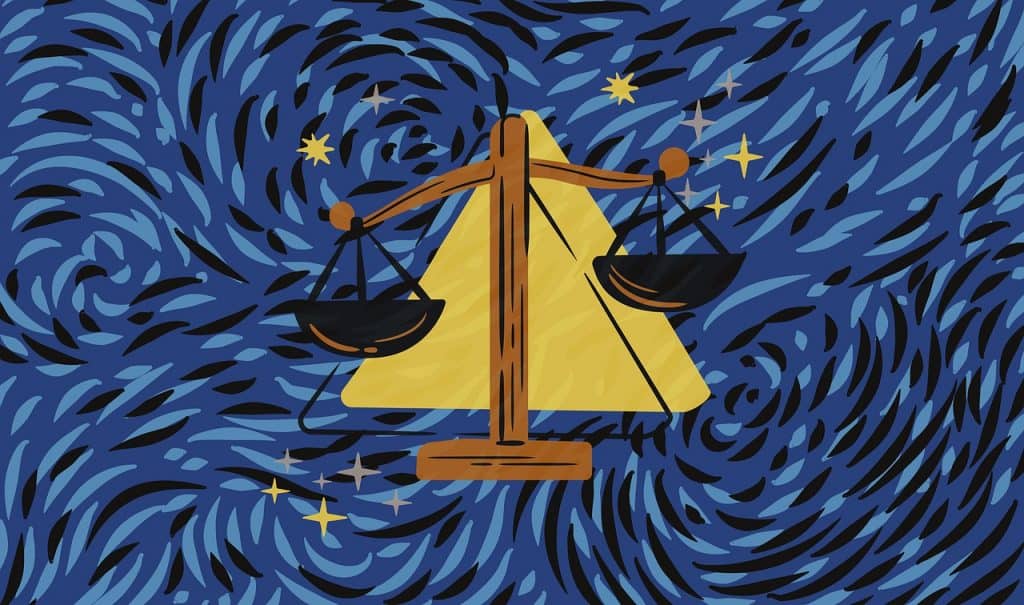 The third entry on this list of the most common zodiac signs is Libra. About 0.087% of people are born under this sign between September 22 and October 23.

Venus, the planet that controls harmony, love, and art, rules Libras. Venus’ energy manifests in Libras as a desire to create balance. The planet also gives them a penchant for the finer things in life.

Libra is a cardinal air sign represented by the scales of justice. Interestingly, the scales are the sole inanimate object symbolizing a zodiac sign. They correlate with a Libra’s interest in creating harmony in everything, from social justice to relationships.

Libras are known to embody the following character traits:

Libras love to keep the peace because of their innate need to create harmony in their surroundings. Therefore, they’re often regarded as non-confrontational.

Because of their ruling planet, Venus, Libras strongly desire to create an environment that speaks to their superb taste. They also tend to be people-pleasers who consider multiple perspectives in all their endeavors.

Given their aesthetically attuned nature, a Libra would thrive as a stylist, interior designer, or art critic. Besides these careers, a Libra would also fit right in as a:

These careers would be fitting because a Libra can tap into their people skills and inherent ability to mediate conflict. Libras can also distinguish right from wrong in any given situation.

Fellow air signs, Gemini, Aquarius, and other Libras, get along well with this zodiac sign. They exist on the same airy wavelength. Libras also pair well with Arians. Although there may be some tension when these two individuals first meet, they can learn many lessons from each other. 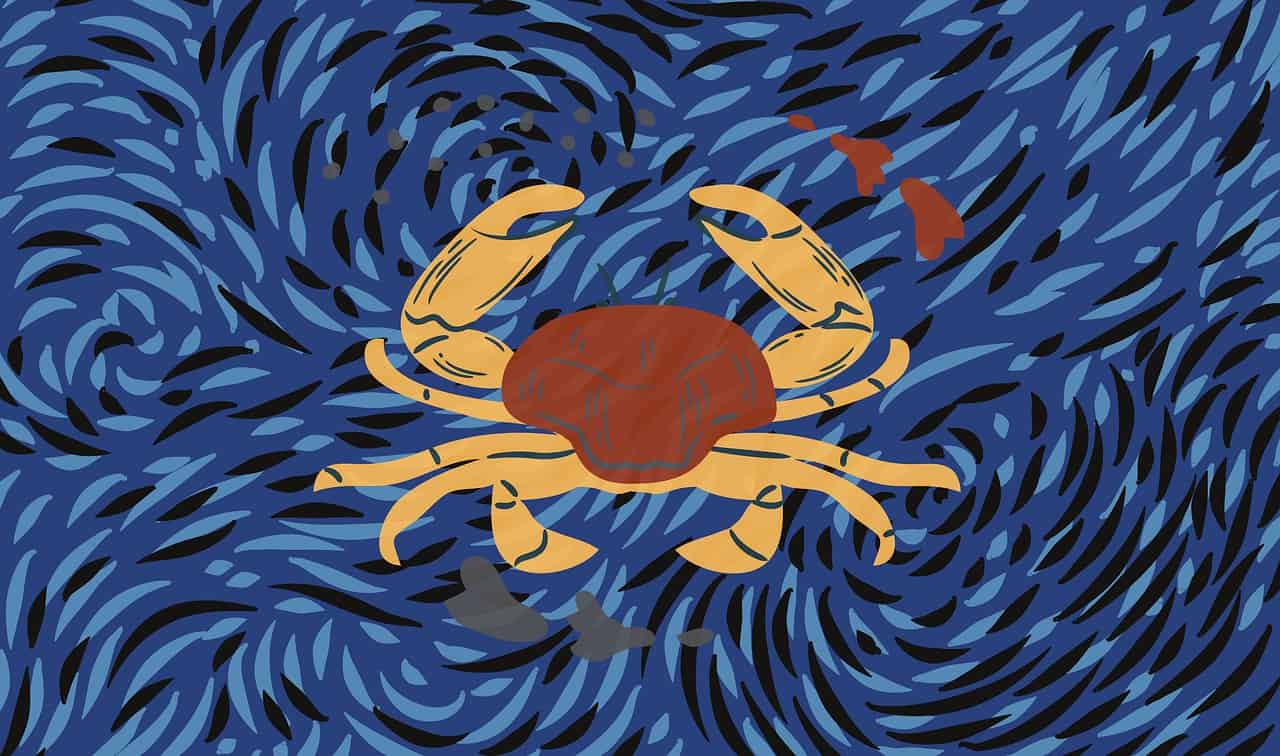 Cancer is the fourth on our list of the most common zodiac signs in astrology. Coincidentally, it’s also the fourth sign of the zodiac. It accounts for about 0.084% of people born between June 21 and July 22.

The moon rules Cancer. Therefore, Cancerians embody the celestial body’s symbols of comfort, maternal energies, and self-care. They love feeling at home by creating cozy, safe spaces. And they tend to be highly concerned with domestic life.

Cancer is a cardinal water sign. It’s symbolized by the crab, representing Cancerians’ dual existence in material and emotional realms. This sign is also all about nourishment and growth.

The typical Cancerian tends to have the following personality traits:

Cancerians cherish their family and friends, holding them at the center of their worlds. They are also susceptible to their environments. They easily perceive people’s moods and feelings when out in the world.

They’re also quite sensitive and emotional individuals. The moon influences their mood, so their emotions tend to be a rollercoaster.

Cancerians do well in any career that requires their intuition and compassion. Their need for comfort can also play a role in their occupation of choice. Therefore, the professions best suited for them are as follows:

Cancerians get along with individuals born under the Cancer zodiac sign as well. They’re also compatible with fellow water signs, Pisces and Scorpio. This is because they all speak the same emotional language. 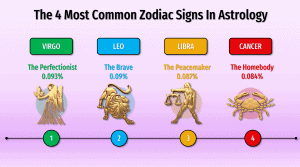 Virgo, Libra, Leo, and Cancer are astrology’s most common zodiac signs. Although this can strip away the uniqueness of individuals born under these signs, it can be a good thing. You can easily find friends and romantic partners you get along with.

If you’re keen for another read, check out our post on the “4 Least Common Zodiac Signs in Astrology.”