When looking into the forms of divination, you may ponder the differences between Numerology and Tarot. They aren’t to be confused, as they offer varying and unique insights. However, there are some areas where they overlap.

Numerology is a discipline centered on the symbolism of numbers. You can derive numbers from your name and date of birth to inform you about your personality and the world. Tarot offers intuition through the Major Arcana and Minor Arcana playing cards. This discipline is often used to solve complex life issues. When combined, Numerology and Tarot offer powerful insights.

If you’re new to Tarot and its symbolism, Numerology is an excellent way to understand the discipline. You can easily learn the different cards in a Tarot deck when you connect them to numerological insights.

Numerology is the study of the relationship between numbers and their effect on individuals and events. It explores the interdependence, symbolism, and energies numbers possess. This fundamentally makes Numerology different from astrology and other forms of divination.

The numbers 1 through to 9 form the foundation of Numerology. Double digits are reduced to a single digit to determine core meanings. There aren’t necessarily good or bad numbers in Numerology. Instead, each number has a spiritual connection. Also, each number signifies a personality trait, strength, weakness, and challenge.

For example, the number 1 is linked with new beginnings, bravery, courage, and resilience in life. As for the number 9, it’s associated with endings, aimlessness, and communicativeness.

Numerology provides a better way to understand yourself and the world. By analyzing the different numbers in your life, like your birth number and personality number, you can discover hidden facts. This is just one part of knowing the differences between Numerology and Tarot. Let’s explore the meaning of the latter next.

Major Arcana Tarot Cards provide an overall image of your life. They depict big life moments and spiritual lessons, telling your story from childhood to maturation and enlightenment. These cards are the more crucial Arcana, and their meanings are more profound. The Major Arcana cards have a symbolic image, numbered from 0 to 21.

The cards in each suit are numbered 1 (ace) to 10. The additional 16 cards are Court Cards, namely King, Queen, Page, and Knight. They denote the personality traits we exhibit.

Tarot cards are said to guide you on the right path in life. When we look to the Tarot for answers to life’s greatest mysteries, we tap into our subconscious minds and inner wisdom. This allows for self-discovery, self-development, and success.

People use the Tarot for different purposes. For some, they believe it’s a way to predict the future. These predictions are often based on a past situation.

Others believe the lessons derived from Tarot can provide guidance in life. The reason is that they allow for self-reflection and reveal the journey you should take to achieve your dreams. Now that you know what Tarot is let’s look at the differences between Numerology and Tarot.

The Differences Between Numerology and Tarot 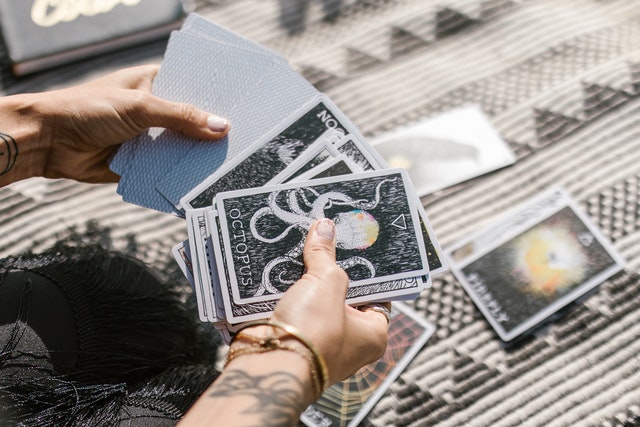 Although they are both forms of divination, Numerology and Tarot differ. Their foundational elements and usage are distinct. One offers broad insights into your life, while the other offers more concrete predictions. Knowing the differences between Numerology and Tarot can guide you on your life’s journey and help you find more clarity.

One of the most apparent differences between Numerology and Tarot is their foundational elements. Numerology is rooted in numbers, with the numbers 1 through to 9 being the major forces of this discipline. Numerologists analyze these numbers as they relate to you and gather insights solely from them.

For instance, two core numbers in the numerology chart are associated with your birthday: Birthday Number and Life Path Number. To calculate your Life Path number, add all the digits relating to your birth date. The single-digit number derived from the calculation will describe who you are.

As you can probably tell, Tarot requires less math. Various playing cards give you insights into yourself and your journey in life. These cards are divided into two categories that offer unique views about an individual. Compared to Numerology, Tarot provides a visual way of telling your life’s story.

Numerology and Tarot are used for different purposes. Some people find Numerology helpful in providing general life forecasts. For deeper meanings or to overcome a specific hurdle, they turn to Tarot. This usually allows anyone to solve complex issues in their life.

While Tarot has some numerical aspects, it also deals with spiritual progression. The numbers on Tarot playing cards operate as a cycle. Even numbers are often unchanging and durable. Odd numbers symbolize various conditions of unpredictability and change. Therefore, Tarot can be cyclical, with every ending denoting a new beginning.

Tarot’s predictions vary whenever a card is drawn as well. It could mean that you face a breakthrough during one session, and the next, you’re thrown into a conflict. All of this depends on your intention when you come into the reading. Also, the Tarot reader’s ability will help you get a more precise reading.

Numerology is often considered more linear and straightforward compared to Tarot. Numerologists derive a number based on your birth date or name. These numbers are linked to specific vibrations and energy. The meanings behind your number can be understood and identified easier than Tarot cards.

How Do Numerology and Tarot Work Together?

Now that you know the differences between Numerology and Tarot let’s look at their similarities. You should know off the bat that Tarot and Numerology can be combined. Some of the Major and Minor Arcana Tarot cards are numbered, so you can easily link them to Numerology.

Numerology adds depth to Tarot readings. So, you can pair the two to derive more profound meaning from a prediction. Also, it may help you find your life journey easily. When you combine the two, you’ll also be able to remember Tarot cards better.

Numerological Symbolism in the Arcanas

Since the Major and Minor Arcanas are numbered, you can use Numerology to interpret these numbers. Below is a brief interpretation and breakdown of the numerological symbolism in the Arcanas. 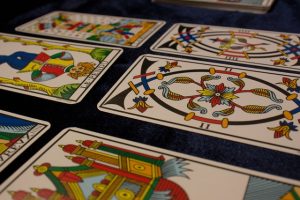 Each Major Arcana card has a number from 0 to 21. Since the numerological scale is from 1 to 9, the numbers above 10 are reduced to single digits for interpretation.

The number 0 denotes the Fool card. Although numbered 0, this card can still be interpreted numerologically. While you won’t find the number 0 in a numerology chart, the number still carries its own unique vibrational energy. Therefore, it still forms part of numerological interpretations of things like Angel Numbers, etc.

At the end of the spectrum is the Wheel of Fortune card. It symbolizes completeness, as it carries the number 10. It reminds us of the various blessings and opportunities in life. Since it’s not a single digit, it carries the childlike innocence of the Fool and the durable attitude of the Magician.

To discover the meaning of all the other Major Arcana cards above 10, convert the double digits to singles. For instance, the Star is number 17. When broken down, it comprises the Magician (willingness to move forward) and the Chariot (the re-awakened desire to proceed).

It’s easier to derive the numerological meanings from the Minor Arcana than from the Major Arcana. Also, you may notice some similarities between the two.

The number 10 is also the final number in the Minor Arcana. It represents the completion of a cycle where the beginning and the end merge. 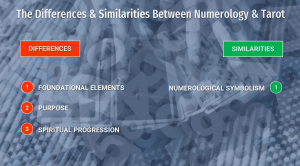 Whether you’re looking to learn more about your potential or personality, both Numerology and Tarot offer valuable insights. The primary difference between the two is their foundational elements.

Numerology informs you about yourself and the world through numbers. On the other hand, Tarot gives you predictions and answers to specific questions through playing cards. And it’s often described as a mirror to your soul. Tarot cards provide lessons at any stage in life, allowing you to reflect on these teachings and live life to the fullest.

For comprehensive readings, combine Numerology and Tarot. They can give you a concrete image of your abilities, traits, goals, and the challenges you face.

2 thoughts on “The Differences Between Numerology And Tarot”