The Fool Tarot card is the first card of the Major Arcana. Many see it as a proclamation of foolishness or shame. While this interpretation isn’t wrong, this card has deeper meanings than what you see at face value.

Represented by the number 0, the Fool Tarot card represents new beginnings. It’s the first of the 22 cards in the Major Arcana, and it’s a sign of unlimited potential. When it appears upright during a reading, it’s a sign that you should commit to a new journey. However, when the Fool is reversed, it encourages you to be aware of your behavior.

This post will explore all you need to know about the Fool Tarot card. We’ll also look at the deeper meanings of this Tarot card.

What is the Tarot?

Most people see the Tarot as a divination tool to predict the future. However, others believe its purpose is to give you direction in life, similar to Angel Numbers. This is because the Tarot encourages self-reflection and reveals the path one must take to achieve their deepest desires.

The Tarot is a deck comprising 78 playing cards with unique meanings, imagery, and symbols. It’s split into 22 Major Arcana and 56 Minor Arcana cards.

When you have a Tarot reading, the Major Arcana cards drawn provide an overall view of your life. They tell your story from when you were a child through to adulthood and eventually enlightenment. These cards are the most significant in a Tarot deck because their meanings are more profound.

The Major Arcana cards are numbered from 0 to 21, with the Fool Tarot card being the first. Each card within the Major Arcana has a symbolic image. For instance, the Fool often depicts a young man precariously standing on the edge of a cliff.

Minor Arcana cards provide insight into the physical realm. They symbolize your daily events, challenges, and lessons. The Minor Arcana are broken down into four suits:

Each suit has ten cards numbered from 1 to 10. The other 16 cards in the Minor Arcana are Court Cards, which symbolize the traits we display in a given moment.

The Tarot has a long and fascinating history that’s worth reading about. However, now that you know the basics let’s take a closer look at the Fool Tarot card. 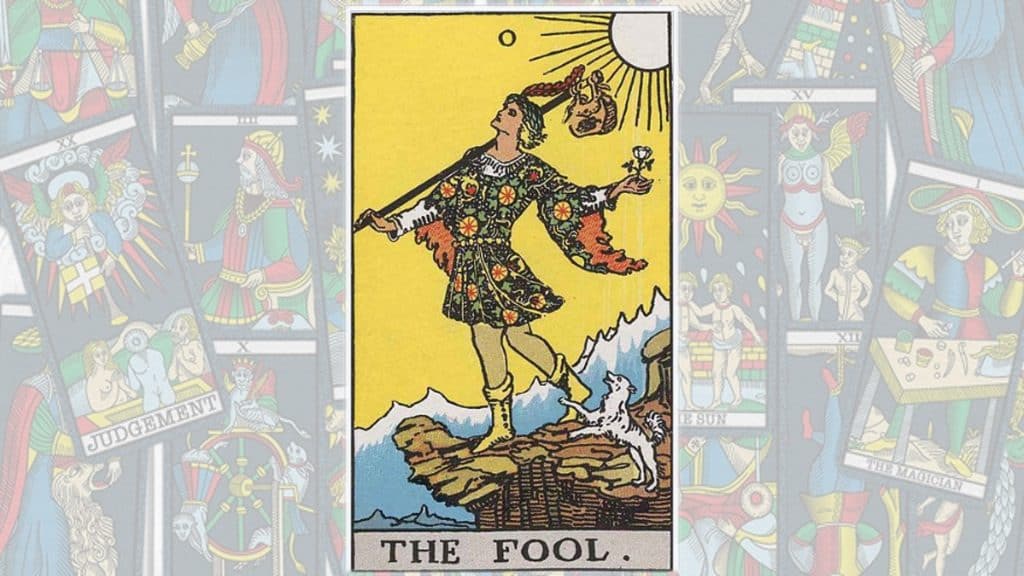 It’s easy to think of the Fool Tarot card as a symbol of mediocrity. That’s because ‘fool’ is often linked to professional court jesters, who aren’t known for their intellect. These characters arose in the Middle Ages when aristocrats hired men, and sometimes women, to perform as professional jokers.

However, the character represented by the Fool Tarot card is far from a buffoon. The Fool is the protagonist in the story since it’s the first card in the Tarot and Major Arcana.

It has yet to experience life’s great mysteries, or what’s referred to as the Fool’s Journey in cartomancy. Therefore, it is considered to embody naïve youth.

The Fool Tarot card has the number 0 printed on its face. This means there’s infinite potential on the querent’s life journey. However, in some decks, it has the Roman numerals XXI and appears last in the Major Arcana.

The numbers written on Tarot cards can be helpful for a beginner. You can interpret them using numerology to gain deeper meanings from the Tarot reading. However, these divinatory practices have significant differences.

Besides representing the protagonist, the Fool Tarot card symbolizes the soul between lives and the divine wanderer. Its upright position is associated with adventure, freedom, beginnings, and spontaneity. And represent absence, vanity, and negligence when reversed.

Each tarot deck shows the Fool in a different light. The Rider-Waite Tarot deck, drawn in the early 20th century and the most commonly used today, depicts a young man. He’s gazing at the sky while standing on the edge of a cliff. And he seems oblivious to the fact that he’s about to fall into the unknown.

It’s unclear from this depiction if he’s naïve or simply heedless. The character holds a white rose in his hand, representing innocence and purity. Also, mountains tower behind him, symbolizing the obstacles on his journey.

Despite the differences in imagery between these decks, specific symbols appear on most of the Fool Tarot cards. These include: 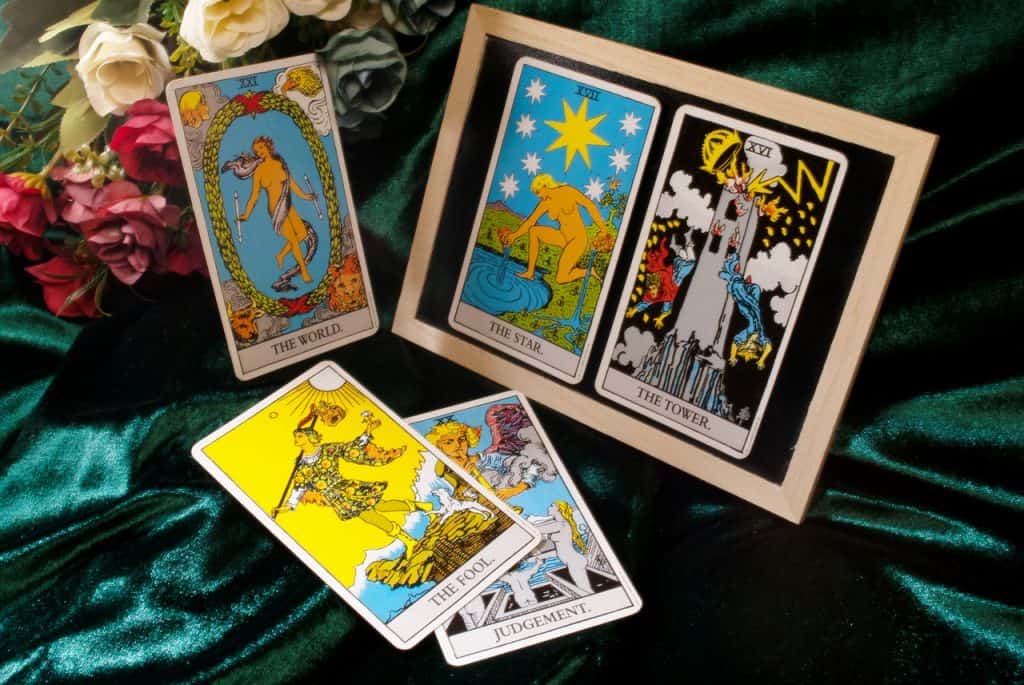 As mentioned, the Fool upright represents beginnings, adventure, and spontaneity. It signals to the querent that they’re about to embark on a new journey. And that they should prepare. Let’s take a closer look at some of the meanings of the upright Fool.

1.   Commit Yourself to a New Journey

The Fool Tarot card is all about beginnings. You’re at the onset of a journey into the unknown. Much like the young man depicted on the card. Although you don’t know where you’re going, the Fool encourages you to be willing to go on the adventure.

Doors of opportunity are about to open, whether in your romantic relationship or career. The Fool Tarot card appears in a career reading as an invitation to change jobs or execute a new business idea. It may also mean that now is the right time to go after that promotion you’ve longed for.

Alternatively, the Fool card invites you to pick up an old project if no changes are coming. Or, if you don’t have new ideas, unleash your creative mind.

In a love Tarot reading, the Fool card encourages the querent to be bold and willing to take risks. This may mean opening up to your partner or being true to yourself. If you aren’t in a relationship, try new things to find the partner of your dreams.

As you embark on this new adventure, be open and curious. Although the unknown lies ahead, face it with boldness, and leave behind your fears, worries, and anxieties.

When you see the Fool during a card reading, it shows that the time to act is now. Therefore, take a leap of faith in any opportunities that come your way.

Even if you don’t feel 100% ready, trust that you have all you need. As depicted on the Fool card, the young man carries nothing more than his essentials in a knapsack. Take this lesson from the Fool and embark on your journey with what you currently have.

Sometimes you may even have to say yes without overthinking a matter. Otherwise, you may miss a chance to change, evolve, and grow.

The Fool Tarot card portrays a maverick or someone impossible to classify. Therefore, it can suggest that the querent should look past conventional thinking and find unusual solutions to a problem.

When the Fool Tarot card appears upside down from your angle of vision, it’s said to be reversed. This is not a bad omen. It represents the Fool entering a new beginning with negative traits, such as negligence, apathy, and carelessness. The following are some interpretations of the Fool reversed.

The Fool Tarot card reversed appears during a reading as a warning. While the imagery on the card depicts the Fool’s delight, it also exhibits his obliviousness. It may be that you’re about to step into an unfavorable situation, so stay alert.

When the Fool card appears reversed in a career reading, it encourages you to be aware of your behavior towards your colleagues. Also, consider your actions’ consequences on those you work with. In other cases, the reversed Fool card opens your eyes to a dreary job and a need for change.

Besides your romantic relationship and career, the fool card also plays a hand in other areas of your life. It can mean that now isn’t the time for spontaneity. Therefore, you must focus on what you started and finish it. Also, face your responsibilities head-on before moving ahead.

The Fool Tarot card can also take on a literal meaning. It appears when your behavior is likened to that of a fool: reckless and novice.

You may be neglecting your responsibilities. Or you’re prioritizing living in the moment so much that you aren’t planning for the future. It could also be that you start many projects without finishing them.

Well, it’s time to stop disregarding the consequences of your actions. Be spontaneous and adventurous to a fault. And consider whether your behavior is putting those around you at risk. 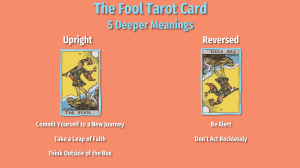 The Fool card represents the starting point in the Major Arcana. It’s where one experiences changes, new beginnings, and lessons. The Fool has yet to experience all the highs and lows of life.

This card holds more meaning than one perceives at first glance. It’s not only a symbol of new beginnings but also a warning. It may encourage you to free yourself from conventional thinking or reduce negative self-talk.

Also, the Fool is far from unwise. Naïve youth is a better way to describe oneself when the card appears. Although you have your head in the clouds, you’re at the precipice of embarking on a journey that’ll help you grow.