The history of tarot encompasses mysterious origins and several pivotal events. Today, this divination tool is vital to many people, alongside astrology and numerology. However, it had a simple purpose before it became a vehicle of intuition and fortune-telling.

Tarot was a leisurely card game played in different parts of Europe. In Italy, it was known as tarocchi. It eventually got the name tarot once it was introduced in France. Antoine Court de Gébelin popularized the idea that tarot cards embodied Egyptian occult knowledge. A writer of his day capitalized on his theory to publish the first tarot deck associated with divination.

Many people rely on the tarot for spiritual guidance. They’re a great tool for personal growth and gaining direction in your life. This article will explore the history of tarot and popular historical tarot decks.

The History of Tarot: A Timeline

While you may know that the history of tarot spans centuries, you may be aware of the details of its past. Since its creation centuries ago, the tarot has transformed in purpose, style, and imagery. And each era in human history had a hand in this transformation. Let’s explore the emergence of tarot cards, starting from the high middle ages.

The details surrounding the origins of tarot cards are unclear. Some theories suggest that crusaders or Roma (Gypsies) brought the cards to Europe between 1095 and 1270. Others claim the first records about tarot cards were made in the year 1367. However, these records were mainly related to card games being banned.

There was little documentation about the number of cards in a tarot deck and the imagery used on the cards. However, a text by John of Rheinfelden from 1377 suggests a tarot deck contained four suits of thirteen cards. And this is not much different from the current tarot decks. 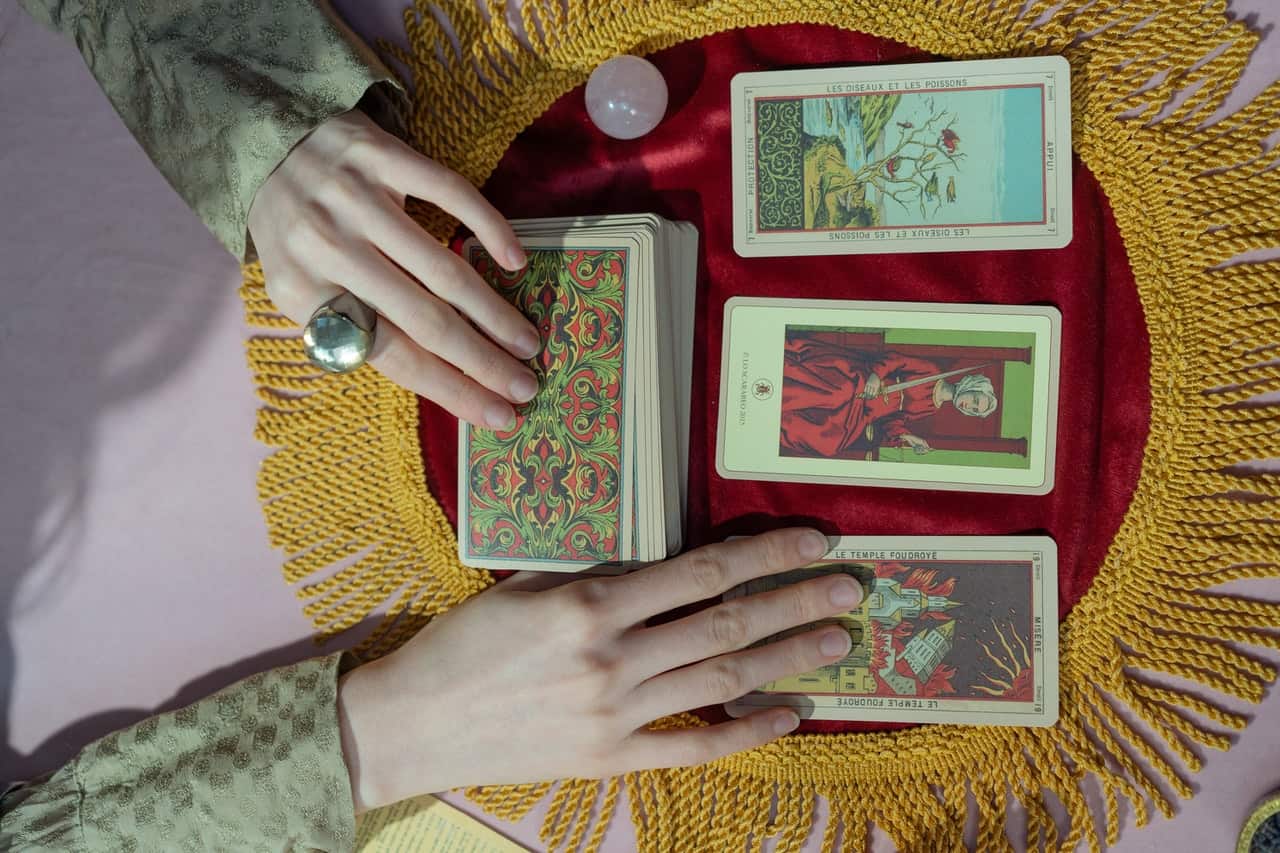 Between the late 14th and early 15th centuries, tarot cards surfaced in Northern Italy. They were first documented between 1440 and 1450 in Milan, Ferrara, Florence, and Bologna. At this point, the tarot pack included twenty-two trump cards and the existing four-suit cards. The cards also had symbolic illustrations, but they didn’t have any occult meanings associated with them yet.

At the start of the long history of tarot, the cards were used to play a leisurely card game known as tarocchi. It was similar to the game of bridge. Aristocrats commissioned artists to create expensive decks called cards of triumph (or carte da trionfi). The decks contained suit cards with illustrations of cups, coins, polo sticks, and swords. And court cards with drawings of a king and two male subjects.

Fast-forwarding through the history of tarot to the Age of Revolution, where the idea of using tarot cards for divination developed. French writer and Freemason Antoine Court de Gébelin claimed the tarot held the occult knowledge of the ancient Egyptians. Supposedly, Gypsies had brought them to Europe from Africa.

Court de Gébelin came about this assertion because he allegedly recognized Egyptian symbols in the tarot card illustrations. However, his theory was flawed. Hieroglyphics were yet to be deciphered, so it wasn’t likely that he had interpreted the ancient Egyptian writings.

Also, tarot cards existed in Europe before the Gypsies arrived. And they actually traveled to the continent from Asia, not Africa.

However, despite the evidence, Court de Gébelin’s theory didn’t seem as far-fetched to many people of his day. In the late 18th century, several European intellectuals already looked to ancient Egypt as the key to understanding our existence.

They believed that Egyptian beliefs and writings held significant insights into the dawn of man. Therefore, when Court de Gébelin connected the tarot imagery to Egyptian theology, his theory was believable for many.

Motivated by Court de Gébelin’s claims, teacher and publisher Jean-Baptiste Alliette ran with the Egyptian connection. He wrote a book on the tarot in 1791 under the pseudonym Etteilla. He asserted the tarot was derived from the Book of Thoth in his writings. This legendary book allegedly belonged to the Egyptian god of wisdom.

Etteilla further claimed he learned divination from a deck of 32 playing cards used for a game called Piquet. He also included his unique Etteilla card in the deck, which is known as the significator. A significator card is used to represent you during a tarot reading. 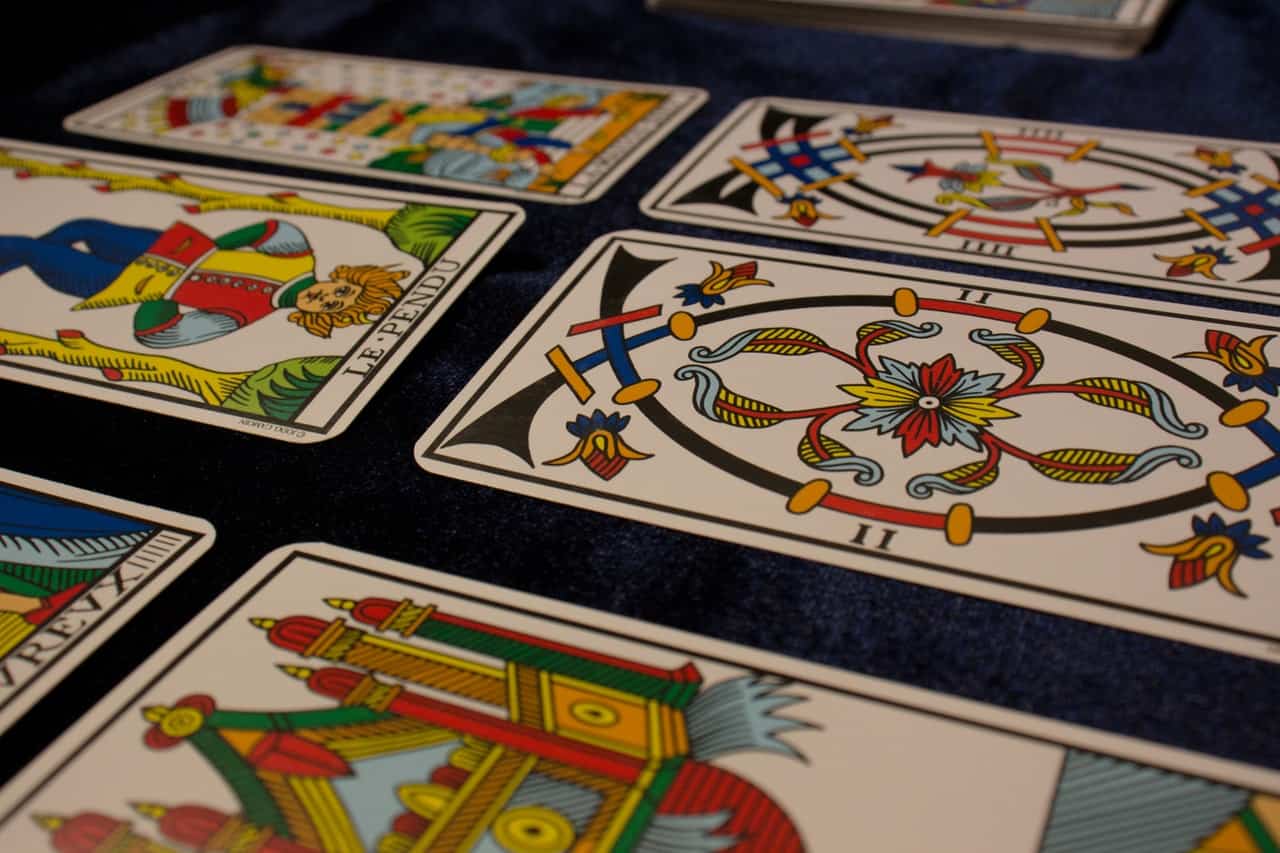 Therefore, the history of tarot cards used for divination began with Etteilla. He created a deck solely for divination in 1789, and the system we know today was born.

Other tarot decks used for divination emerged after Etteilla’s deck. Arthur Edward Waite, British occultist and member of the Order of the Golden Dawn, developed the Rider-Waite tarot deck in 1909. The Rider-Waite deck is the template for many tarot decks we see today. Aleister Crowley, Waite’s supposed nemesis, published the Thoth deck in 1943.

By the mid-twentieth century, tarot cards were widely used for divination. Creators started including cards representing queens, trumps, and the fool in the system, forming a complete deck of 78 cards. Jean-Baptiste Pitois, or Paul Christian, coined the terms “Major Arcana” for the 22 trump cards and “Minor Arcana” for the suit cards.

Tarot cards were also linked to numerology in later years, allowing us to find deeper meaning and insight during readings. Today, you can find tarot decks with various themes. These include Star Wars, the Avengers, and cartoons.

The history of tarot didn’t revolve around one tarot deck. In fact, there were several tarot decks in circulation over the centuries. Some were named after the family who commissioned the decks, and others after writers.

Each deck was special, containing imagery and symbolism unique to the era. These are some of the most popular historical tarot decks.

The Visconti-Sforza deck is the oldest surviving and complete deck of tarot cards. Bonifacio Bembo presumably created it in 15th century Italy for the Visconti-Sforza family. The cards were hand-painted by fine artists, and it wasn’t until centuries later that they were used for divination.

The Tarot of Marseilles

The Tarot of Marseilles is one of the most renowned decks ever produced. This deck originated in the 17th century, and it was used to play tarocchi. The artists of the day printed the cards on woodblocks and colored them by hand using simple patterns. Centuries later, the imagery on the cards inspired divination tarot decks.

The Tarot of Marseilles, or Marseilles deck, is still an incredibly popular deck among experienced tarot readers.

Arthur Waite and artist Pamela Colman Smith collaborated to create the Rider-Waite tarot deck. This deck is most often used by beginners because it is easy to understand. It was published in 1909 with artwork inspired by Sola Busca. Sola Busca is a tarot deck that belonged to the family of Milanese nobles for around five generations.

This deck reintroduced the act of illustrating all 78 cards in a tarot deck. Typically, the pip cards (or numbered suit cards) in tarot decks in the early 16th century were only marked with symbols. Full illustrations were reserved for the 22 trump cards (or Major Arcana). So Smith incorporated humans into the artwork along with other symbols.

Aleister Crowley, an English ceremonial magician, poet, and novelist, created the Thoth tarot deck. Lady Frieda Harris illustrated the deck, including various scientific and occult symbols. The Thoth deck inspired many decks we see today. It reflects artistic styles of the early 20th century, such as Rayonism and Constructivism.

This deck is considered to be one of the most complex tarot decks, with intricate symbolism and often confusing imagery. As such, this tarot deck is not recommended for beginners.

The history of tarot spans centuries. Tarot cards became known to the world as early as the 13th century. However, the jury is still out on the exact point in human history when tarot cards were created.

Tarot cards transformed from an instrument of entertainment to a divination tool connected to Ancient Egyptians. This is all thanks to Antoine Court de Gébelin. Though many believed what Court de Gébelin published, there were several holes in his claims. Consequently, Etteilla published the first tarot deck used for divination.

Today, tarot is one of the most popular forms of divination in the world, along with numerology and astrology. Tarot cards aren’t reserved for aristocrats any longer. Anyone can get their hands on them in whatever theme they like. Pop culture tarot cards are prevalent, with decks catered to Jane Austen enthusiasts, Star Wars fans, and more.

Throughout most parts of Europe, tarot cards are still considered to be playing cards. They have no occult significance, nor are they split into the Arcanas.