The Magician Tarot card may appear during a Tarot card reading. It’s considered a positive and inspiring symbol, prompting you to take action to manifest your deepest desires.

In the Major Arcana, the Magician Tarot card appears after the Fool. Therefore, it’s seen as one’s reward for overcoming the obstacles presented by the reversed Fool. When the Magician appears upright during a Tarot card reading, it symbolizes resourcefulness, willpower, manifestation, or potential. If it appears reversed, the Magician represents poor planning, procrastination, manipulation, or untapped potential.

What is the Tarot?

The Tarot is a deck of 78 cards used in card games dating back centuries. Today, we know it primarily for its divinatory uses.

Each card in the Tarot has specific symbols, meanings, and illustrations. Therefore, during a Tarot reading, you can derive meanings that apply to your life and circumstances. Think of it like Angel Numbers, which also provides guidance.

The Tarot is divided into two groups: Major Arcana and Minor Arcana. There are 22 Major Arcana cards. The Major Arcana provides a holistic view of a querent’s life, depicting your progression from childhood to adulthood.

Therefore, the Major Arcana’s meanings are more profound and significant than the Minor Arcana. Each card within the Major Arcana has symbolic imagery and a number from 0 to 21. Therefore, you find the deeper meanings of a card using Numerology.

The Minor Arcana cards relate to the everyday happenings, obstacles, and teachings in a querent’s life. They’re a window into the physical world and how you operate within it.

There are 56 Minor Arcana cards split into four suits: the Wands, Swords, Cups, and Pentacles. Each suit comprises ten cards numbered from 1 to 10. The remaining 16 cards are Court Cards, which reflect your character in a specific situation.

The Tarot prompts a querent to reflect on their life. It’s like a mirror you hold up to yourself to assess your thoughts and feelings in a given moment. You can relate it to Numerology, albeit there are significant differences.

Succeeding the Fool, the Magician is the second card in the Major Arcana. It’s numbered one, which means new beginnings, transformations, and change in Numerology. Additionally, it’s linked to the planet Mercury.

Looking at its character, the Magician forges their own destiny. It represents an enterprising individual who acts without hesitation and reaps results from their efforts. The Magician is aware of their capabilities and knowledge and uses them to achieve their objectives in life.

The Magician Tarot card is undoubtedly a positive symbol. It’s your reward for overcoming the challenges presented by the reversed Fool. Therefore, when it appears during a reading, it often symbolizes your ultimate control over your life’s direction.

When setting goals, the Magician Tarot card can aid you. Meditate with it to gain the clarity you require, whether pursuing a big or small objective. 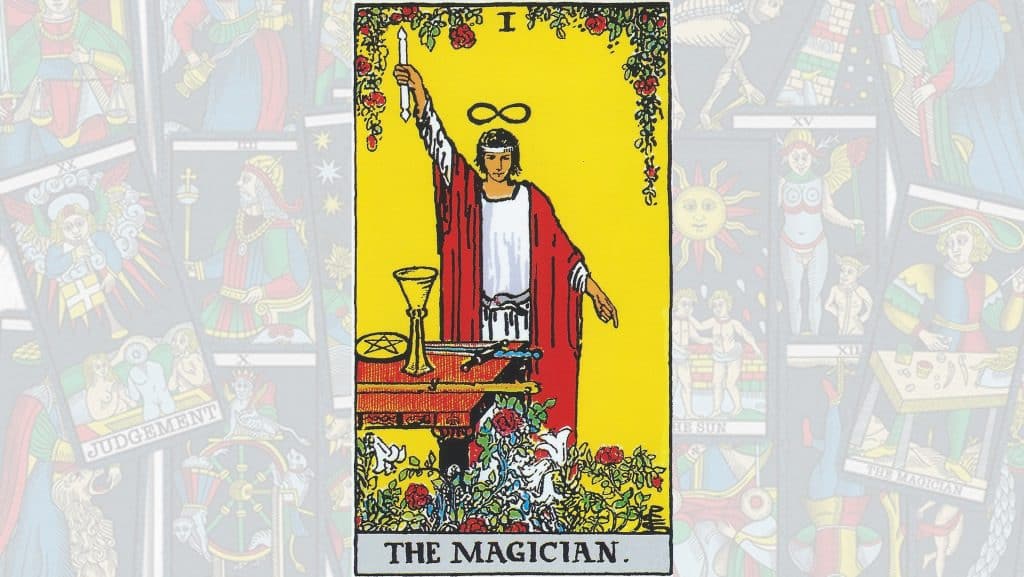 You may notice the Magician appears different in each Tarot deck. However, overlapping similarities are often linked to the Rider-Waite Tarot deck or the Tarot of Marseilles.

The Rider-Waite Tarot deck was created in the early 20th century. And most Tarot readers use it today for divinatory purposes. The artist depicts the Magician as a man with one arm stretched to the sky and the other pointing to the earth.

His positioning references the spiritual and physical worlds. Therefore, one can think of the Magician as a conduit between the nonphysical and material realms.

A table stands before the Magician. On it lies a Cup, Sword, Wand, and Pentacle, signifying the four suits of the Minor Arcana. These symbols relate to the classical elements earth, air, fire, and water. And they represent the Magician’s tools to manifest his desires into reality.

The Magician wears a white robe, symbolizing purity and inexperience. He wears a red mantle over the robe, representing willpower, passion, rage, or egotism.

There’s also an infinity symbol above his head and a snake biting its tail around his waist. These symbols represent his access to unlimited potential.

A rose and lily bush lie at the bottom of the Magician Tarot card. This symbol speaks to the Magician’s ability to foster and realize his potential.

In the Tarot of Marseilles, the Magician is known as Le Bateleur. The name references the men who performed magic tricks in the Middle Ages. It shares some similarities to the Rider-Waite deck.

However, the Magician is depicted with six fingers on his left hand instead of five. This may symbolize his ability to manipulate reality or stand for his ingenuity. In addition, there’s a small plant jutting out of the ground between the Magician’s feet.

The Magician has specific meanings when it appears upright during a reading, as with all Tarot cards. Since the Magician symbolizes wisdom, balance, and knowledge, it may mean manifestation, power, resourcefulness, or potential when upright. Below we explore the deeper meanings of the upright Magician.

You may be too focused on what’s before you, so the Magician calls you to look beyond the physical world. It’s telling you that you can change your destiny through manifestation.

Manifesting your desires entails shifting your focus away from what’s before you in the material world. You’ll have to tap into your subconscious mind. And believe that you’ve attained everything you want already, thanks to the work you’ve put in to achieve your goals.

Perhaps your focus has drifted away from your objectives in life. In that case, the Magician invites you to pursue your goals once more.

There’s no better time than now to start working towards what you desire in life. You have the power within you, much like Magician. Taking action with focused attention and immense concentration will lead you closer to achieving your goals.

Remember that commitment and discipline also play a role in pursuing your goals. Therefore, avoid distractions and procrastination as much as possible.

Have a clear vision of what you want to achieve. And ensure you have a deep soul connection to your goals and intentions. Also, be wary of ego (reputation, recognition, or wealth) driving your intentions, as this can work against you.

3.   Tap Into Your Potential

The Magician has various skills and the ability to put his expertise to great use. He also has the fire, earth, air, and water elements at his disposal. These elements represent your spiritual, physical, mental, and emotional energy.

Like the Magician, you have everything you need when working on a new project or venture. You’ve already gathered all the tools, knowledge, and capabilities required to move your idea forward. All you have to do is tap into your potential to see your dreams and goals through. 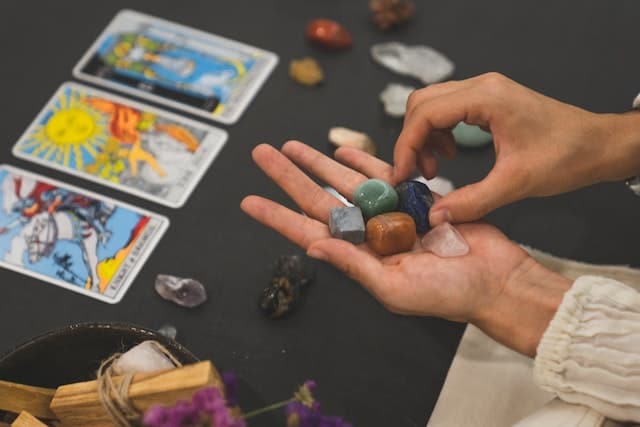 When the Magician Tarot card appears upside down from your line of sight, it’s said to be reversed. In this case, it means manipulation, powerlessness, poor planning, or wasted potential. Let’s dive deeper into these meanings below.

When the Magician appears reversed, it may tell you that you’re hesitating to take action. You may manifest your desires, but you’re holding back from seeing the complete picture. Or you’re not sure you have everything you need to bring your dreams to fruition, so you’re hesitating to move forward.

If any of this rings true to you, it’s time to stop being hesitant. Act without fear and trust that the universe will reward you once you do. Pay attention to your intentions and intuition. Also, look for opportunities that arise, and don’t stop yourself from pursuing them if they align with your end goals.

The Magician reversed is a sign of halted progress on your road to success. While you may know you have the knowledge, wisdom, and skills to pursue your goals, you may be stagnant.

Perhaps you don’t know how to execute your idea. Or you forgot your why along the way. If you’re uncertain about the goal you’re pursuing, the Magician reversed calls you to realign with your end goal.

To achieve realignment, analyze what’s stopping you from achieving your goal. Do you think you don’t have the expertise or knowledge? Are you afraid of something on your path to success?

By asking yourself the hard questions, you can get to the root of the problem. And you’ll be back on the path you’re destined to walk in no time.

3.   Be Mindful of Your Intentions

The Magician is a master of illusion when reversed. He can be deceptive and manipulative, distracting people from what’s happening. When you embody these adverse traits, the Magician appears reversed.

Perhaps you’ve been acting for personal gain without regard for others. Or you’ve

been power-hungry, so you made reckless decisions with negative consequences.

These behaviors can hinder your progress with your goals. Also, you may feel off when pursuing your desires because you have lost touch with your higher self. Therefore, you need to assess whether everything you’re doing is for selfish gain and tune back into yourself. Once more mindful of your intentions, you will notice a change in how you pursue your goals.

4.   Be Wary of Other’s Intentions

Receiving the Magician in its reversed form may also mean someone else doesn’t have your best interests at heart. Therefore, you may not need to pay attention to your intentions but to those of the people closest to you. 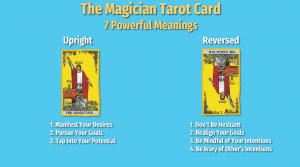 The Magician appears during a Tarot reading to motivate and inspire you. It instills a passion for life within you and drives you towards your destiny. You’re encouraged to take action in your life and trust that you have all the tools you need to succeed.

Consider the Magician Tarot card’s symbolism as a message from the divine telling you to reach for the stars. Even if you initially feel uncomfortable, trust that your desires will come to fruition.

The Magician also has an opposite side. When it appears reversed, it may mean you’ve lost focus of your goals. You may also not be taking action to manifest your desires.

Sometimes, it can mean that you’re approaching your goals with ill intentions. Or someone in your circle doesn’t have the best intentions for you.